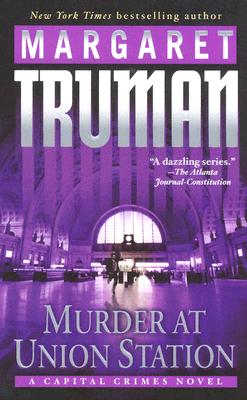 When Washington's splendid Union Station opened its doors in 1908, the glorious structure epitomized capital stylishness. Today, restored and refurbished, the station is again a hub of activity where the world's most famous and infamous people meet-and often collide. Now, in Margaret Truman's new Capital Crime novel, this landmark locale becomes the scene of a sensational shooting whose consequences ricochet from seedy bars to the halls of Congress.

Historic Union Station means nothing to the elderly man speeding south on the last lap of what turns out to be a one-way journey from Tel Aviv to D.C.-on a train that will soon land him at Gate A-8 and, moments later, at St. Peter's Gate. This weary traveler, whose terminal destination is probably hell, is Louis Russo, former mob hit man and government informer. Two men are at the station to meet him. One is Richard Marienthal, a young writer whose forthcoming book is based on Russo's life. The other is the man who kills him. Russo has returned to help promote Marienthal's book, which, although no one has been allowed to read it, already has some people shaking in their Gucci boots. The powerful fear the contents will not only expose organized crime's nefarious business, but also a top-secret assignment abroad that Russo once masterminded for a very-high-profile Capitol Hill client. As news of Russo's murder rockets from the MPD to the FBI and the CIA, from Congress to the West Wing, the final chapter of the story begins its rapid-fire unfolding. In addition to the bewildered Marienthal and his worried girlfriend, there is an array of memorable characters: rock-ribbed right-wing Senator Karl Widmer; ruthless New York publisher Pamela Warren; boozy MPD Detective Bret Mullin; shoe-shine virtuoso Joe Jenks; dedicated presidential political adviser Chet Fletcher; and President Adam Parmele himself-not to mention freelance snoops, blow-dried climbers, and a killer or two. There's no place like the nation's capital, and as her myriad fans know, Margaret Truman always gets it right. Murder at Union Station is a luxury express, nonstop delight. From the Hardcover edition.

The Memorable Words of The Man From Missouri: Harry S. Truman

Out of the Jaws of Victory: The astounding election of 1948

"A History of Ireland in the XVIIIth Century, Volume V"