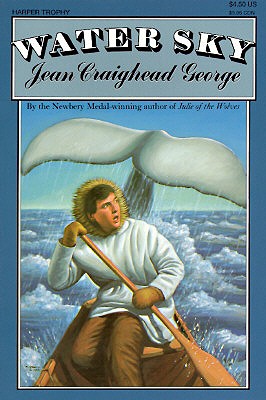 "Nukik Lincoln gasped, his skin tingling. Could this be happening Had he just seen a whale with a white tail? Was it now going to give itself to him, as Vincent had said?

Lincoln still could not believe it. He had had only one thing in mind when he made the long trip from Massachusetts to Barrow, Alaska, and that was to find his Uncle Jack. He thought Vincent Ologak, an Eskimo whaling captain, could tell him where to find him, for Vincent was the man Uncle Jack had planned to see when he went to Alaska to help save the bowhead whale from extinction.

But Vincent Ologak cannot or will not give Lincoln a straight answer. As far as he is concerned, Lincoln is there for a very different purpose from the one he himself imagines: A whale is coming to Lincoln, a whale that will end two years of waiting and suffering for Vincent's people.

Nothing in Lincoln's past experience quite prepares him for the whaling camp at Barrow. Here ice is a living presence and the temperature is so cold that spilled water hits the ground as ice balls. Here for the first time he meets young Eskimos-especially Unpik, with whom he falls deeply in lovewhose strong identification with their Eskimo culture leads Lincoln to question his own identity. But above all else it is Vincent Ologak's vision of him that teaches Lincoln more than he has ever learned anywhere before

Jean Craighead George blends masterfully observed nature scenes and a wry story of first love in one of her most appealing and moving novels.

Life in today's New England hasn't prepared Lincoln for the ways of an Alaskan whaling camp. But it's there that he draws strength from an Eskimo captain's vision of him and his connection with Nukik, the whale that gives itself to Lincoln and the people of Barrow. 'Beautifully written, with a fine blend of Eskimo ritual and modern science.' 'SLJ.