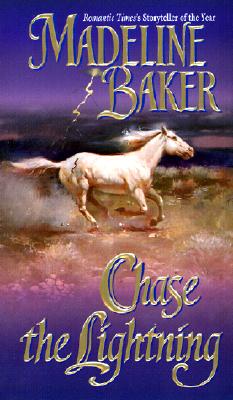 The stallion emerged from the swirling mist, sunlight dancing on its white coat, glinting like liquid silver in its flowing mane and tail. It was a spirit horse, Trey had been told, one that would always carry him away from danger. And if ever he'd needed such an animal, now was the time. With a bullet in his back and a posse on his trail, he wouldn't last long unless the words of his Apache grandfather came true.

Amanda couldn't believe her eyes when the beautiful white stallion appeared in her yard with a wounded man on its back. Dark and ruggedly handsome, the stranger fascinated her. He had about him an aura of danger and desire that excited her as her law-abiding fiance never could. But something didn't add up: Trey seemed bewildered by the amenities of modern life; he wanted nothing to do with the police; and he had a stack of 1863 bank notes in his saddlebags. Then one soul-stirring kiss made it all clear -- Trey might have held up a bank and stolen through time, but when he took her love it would be no robbery, but a gift of the heart.