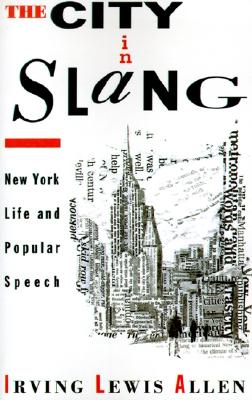 The American urban scene, and in particular New York's, has given us a rich cultural legacy of slang words and phrases, a bonanza of popular speech. Hot dog, rush hour, butter-and-egg man, gold digger, shyster, buttinsky, smart aleck, sidewalk superintendent, yellow journalism, breadline, straphanger, tar beach, the Tenderloin, the Great White Way, to do a Brodie--these are just a few of the hundreds of popular words and phrases that were born or took on new meaning in the streets of New York.
In The City in Slang, Irving Lewis Allen traces this flowering of popular expressions that accompanied the emergence of the New York metropolis from the early nineteenth century down to the present. This unique account of the cultural and social history of America's greatest city provides in effect a lexicon of popular speech about city life. With many stories Allen shows how this vocabulary arose from city streets, often interplaying with vaudeville, radio, movies, comics, and the popular songs of Tin Pan Alley.
Some terms of great pertinence to city people today have unexpectedly old pedigrees. Rush hour was coined by 1890, for instance, and rubberneck dates to the late 1890s and became popular in New York to describe the busloads of tourists who craned their necks to see the tall buildings and the sights of the Bowery and Chinatown. The Big Apple itself (since 1971 the official nickname of New York) appeared in the 1920s, though first in reference to the city's top racetracks and to Broadway bookings as pinnacles of professional endeavor. Allen also tells fascinating stories behind once-popular slang that is no longer in use. Spielers, for example, were the little girls in tenement districts who danced ecstatically on the sidewalks to the music of the hurdy-gurdy men and, when they were old enough, frequented the dance halls of the Lower East Side.
Following the trail of these words and phrases into the city's East Side, West Side, and all around the town, from Harlem to Wall Street, and into the haunts of its high and low life, The City in Slang is a fascinating look at the rich cultural heritage of language about city life.