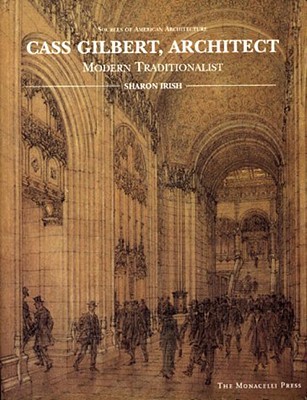 "As new except for faintest agewear to exterior page edges. 194 indexed, illustrated pages. 8.25x10.75x.8"" Gilbert's buildings range from homes and the state capitol in Minnesota, to the Woolworth Building and Customs House in New York, the Railroad station in New Haven, Connecticut, and the US Supreme Court building.N9"

American architect Cass Gilbert built many of the major monuments of his generation. Inspired by design throughout the ages -- ancient Greece and Rome, medieval and Renaissance Europe, and contemporary traditions such as the Richardsonian Romanesque -- he created buildings for the sites, clients, and programs of his own time. Gilbert began his architectural career in St. Paul, Minnesota (his childhood home), in 1885. In 1895, Gilbert won the competition for the Minnesota State Capitol, which would be completed ten years later.
In 1899, Gilbert won another important competition, this one for the United States Custom House in New York City, where he soon moved his practice. Gilbert's career reached its peak in the 1910s and 1920s with civic and commercial buildings of great significance: the Woolworth Company Building (at its 1913 completion the tallest building in the world) and the New York Life Insurance Company Building, both in New York City, the United States Military Ocean Terminal in Brooklyn, and the United States Supreme Court Building in Washington, D.C. These landmark works, emblematic of Gilbert's mastery of form and expression, reaffirm his position as a leader in design and in the profession.

Architecture in Berlin: the 100 most Important Buildings and Urban Settings