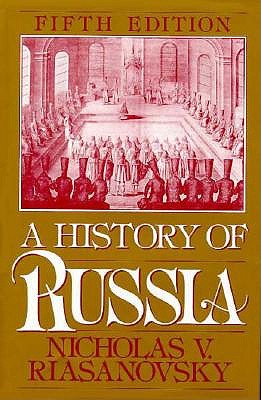 "As new except for slight tilt to spine and faint soil to exterior page edges. Red cloth with gilt lettering in crisp and clean dust jacket. 711 pages including bibliography, illustrated with maps and diagrams including a genealogical table of Russian rulers from the 1st century through the 20th. Narrative from B.C. to the dissolution of the Soviet Union, and the events of 1992. "

Revised and expanded to cover the initiation of glasnost and perestroika in 1985, the resignation of Gorbachev in 1991, the dissolution of the Soviet Union, and the events of 1992, the most authoritative, readable, and well-balanced history of Russia is now more timely than ever.
Widely acclaimed as the best one-volume survey available, written by one of the foremost scholars in the field, Riasanovsky's History has for years been the consistent choice of scholars, students, and general readers alike. Drawing on both primary sources and major interpretive works, including those by Soviet historians, it paints a rich portrait of each period of Russian and Soviet history through ample coverage of social, economic, and cultural developments, as well as political and military history. Riasanovsky also offers unusually balanced treatment of historiographical issues, stating his own position on points of contention and presenting in turn contrasting viewpoints, allowing readers to form their own judgments.
With an important new chapter on the Gorbachev period and the breakup of the Soviet Union, and a fully updated bibliography, Riasanovsky's History remains a cornerstone of the literature, the most comprehensive and reliable guide to the main themes of Russian history.

Title: A History of Russia

Will the soviet Union Survive Until 1984?

Monographs in International Affairs: The Soviet Union and the October 1973 Middle East War: The Implications for Detente