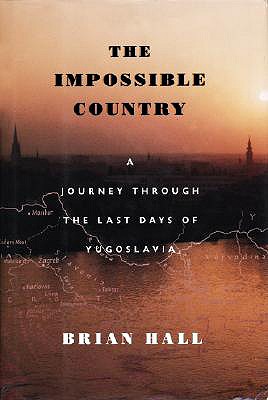 "Book and DJ, as new. DJ is unpriced. Hall, a freelance American journalist, was one of the last outsiders permitted to travel freely in Yugoslavia during the final days of its existence. From early May to mid-September 1991 he questioned members of the various Balkan ""tribes"" in Zagreb, Belgrade, Sarajevo and points in between, listening to comments on their history, prejudices, superstitions, fears, aspirations and opinions of other ethnic and national groups. With an unbiased attitude and colorful writing style, Hall describes the last days of peaceful coexistence among Yugoslavia's religious and ethnic communities and delineates conflicts that would trigger the horrors of ""ethnic cleansing"" and war. In one particularly telling section, he recounts the dynamics of hatred swirling around Apparition Hill in Medjugorje, where religious pilgrims flock to witness the appearance of the Virgin."

This is a privileged glimpse of the former Yugoslavia from within, one that gets behind journalistic accounts to present the intimate hatreds, prejudices, aspirations, and fears of its citizens. American journalist Brian Hall spent the spring and summer of 1991 traveling through Yugoslavia, even as the nation was crumbling in his footsteps. Having arrived a week after the catalytic May 2 massacre at Borovo Selo, he watched as political solutions were abandoned with dizzying speed, and as Yugoslavia's various ethnicities, which had managed to reach a point of tolerant coexistence, tipped into the violence of civil war. Hall, one of the last foreigners to travel unhindered through the region, has captured the voices of both the prominent and the unknown, from Serbian demagogue Slobodan Milosevic and Bosnian leader Alija Izetbegovic to a wide variety of everyday Serbs, Croats, and Muslims: real people, likeable people, as he says, who have been pushed by rumor and propaganda into carrying out one of the most intense and brutal ethnic conflicts in world history. At the same time, he provides the indispensable historical background, showing how the country called Yugoslavia was cobbled together after World War I, tracing the ethnic cleansing practices that have marked the area for centuries, and explaining why every attempt at political compromise has met with such suspicion and resistance. With a sharp eye and flawless ear, Brian Hall has caught a unique moment in history in a book that is superbly researched, beautifully written, funny, fascinating, and poignant.

Title: The Impossible Country: A Journey Through the Last Days of Yugoslavia